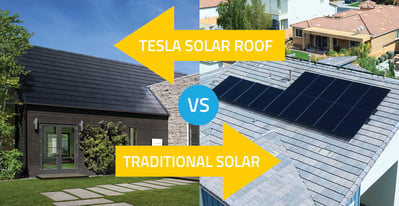 The Tesla Solar Roof has stirred up a lot of new and renewed interest in solar power technologies. As the first of its kind on the market, the hype is understandable. But with it brings questions about how this combo solar and roof offering compares to the tried-and-true traditional solar. In general, though, it comes down to what you value most: aesthetics vs. pricing. If your main concern is with how it looks, Solar Roof might be the best choice for you. If you're looking to maximize your solar production for the cost, traditional solar will probably be a better fit. In this blog, we'll take a closer look at why this is the case.

Comparing Solar Roof to traditional solar panels isn't really an apples-to-apples comparison since Solar Roof combines solar and roofing into one single product offering. But with the help of our friends over at our sister company Sun Valley Solar Solutions, we've put together the top four comparisons you should evaluate when deciding between the two options.  And as a Tesla Solar Roof Certified Installer, be sure to contact us with any remaining questions you might have.

When looking at Solar Roof versus traditional solar, there are two different costs to take into consideration: the cost of solar and the cost of roofing work, if applicable.

The key to determining Solar Roof pricing is to remember that not all solar roof tiles produce electricity. The final price is determined by combining the cost of energy-producing tiles with the non-energy-producing tiles and ancillary roofing materials. For the roofing elements, costs are estimated at around $10-$14 per square foot with prices increasing depending on the project's complexity and your individual roof's shape. For the solar components, pricing is estimated at $3.50 per watt. The more solar tiles added into the design, the higher the price and the higher the solar production. To give customers an idea of their specific pricing, Tesla produces preliminary designs with both the minimum and maximum number of solar tiles integrated into the design. Customers can choose any amount in between those two values.

Traditional solar is more straightforward in its pricing. Here in Arizona, an average price of $3 per watt for a cash purchase is generally what to expect. In comparison, this is about half of what Solar Roof costs for the same amount of solar production.

When Solar Roof is installed, the integrated system becomes both your roof and your solar array. As such, you don't need to price a roof separately because the solar roof does both.

When looking at traditional solar panels, there are typically no additional roofing costs so long as your roof is in good health.  Traditional solar can be installed on almost any roof type. But, If your roof needs replacing, $4.00 per square foot is a reasonable estimate in Arizona for a new roof. The price of a repair will vary depending on the severity of the damage.

Depending on the panel, most of today's solar panels operate anywhere between 15% to more than 22% efficiency. The final production number will depend on the number of panels installed. With traditional solar, you'll get a lot more energy production within the same footprint.

One of the biggest benefits homeowners find with Solar Roof is the improved aesthetics. Since the solar tiles and non-solar tiles are one integrated system with no visual difference between the two, there are no aesthetic compromises. In addition to this seamless integration, there is also no racking or exposed conduit. Your roof will look great from any angle with Solar Roof.

Traditional solar sits on top of the roof with racking supporting the solar panels. There are options for all-black panels and racking to improve the look of traditional solar. With solar's proliferation in the past decade, many people have become accustomed to seeing solar arrays on top of roofs. The increased familiarity and all-black options have added to traditional solar's improved aesthetics.

As a new technology, there might be delays in getting Solar Roof permits approved by fire authorities, power utilities, and HOAs. This can extend the timeline for installation as well as current permit backlogs and seasonal demands. In addition, Solar Roof won't work on flat roofs or roofs that have too many architectural features.

The biggest limitation many customers find of traditional solar is the aesthetics. As mentioned in point #3, there have been advancements in the look of solar panels that have improved this dramatically even over the past couple of years.

If you're considering Tesla Solar Roof, contact us through the button below for a free quote! If you're simply wanting a free roof evaluation, click here.